40. Chess and draughts in The Netherlands, 17th c.
In this chapter I continue the trench of the two previous chapters. Successively I shall go into tables, draughts and chess. 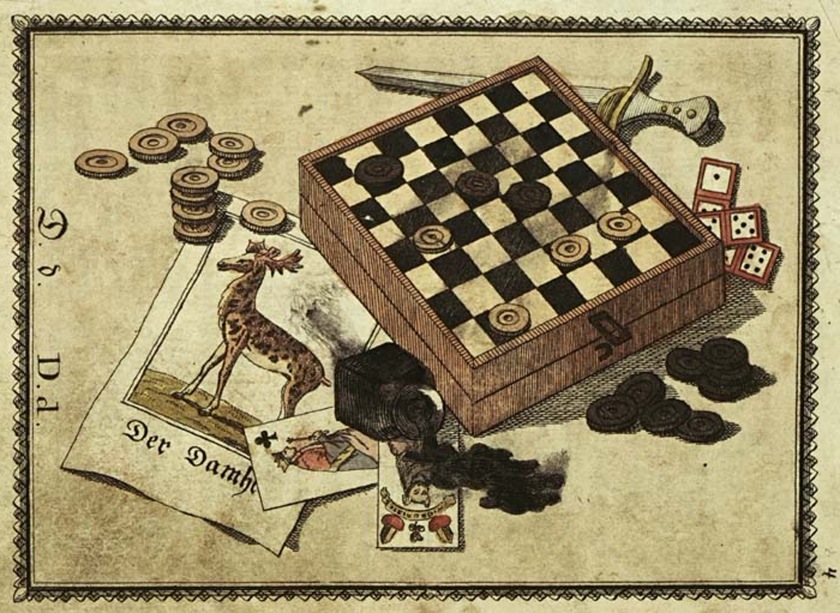 I jump to the year 800 AD.
Tables is an ancient game. For this reason, I may assume the inhabitants of the Low Countries played the game in 800. The Dutch name for the game was tafelspel, borrowed from French; the French name was tables. The Dutch name for the board was tafelbord.
How did the board look like? The medieval boards which have come down to us were from later centuries. They were flat, folding and had a gaming pattern on both sides: on one side a tables pattern and on the other side a 64 squares pattern, see chapter 13. Below the oldest board of this pattern we know. In 800 AD the Dutch had not yet made acquaintance with chess, probably the game started its march from Spain to the north in the 10th c., and for this reason the gaming board of the 9th c. will have a pattern for tables only. Or perhaps also a pattern for line draughts? And was it folding? 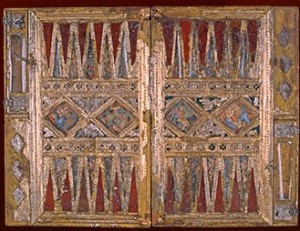 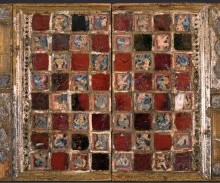 I don’t know the tables varieties my forefathers played in the year 1000. Some centuries later they seem to have invented a variety which became popular all over Europa called verkeren. First record: an account for the duke of Burgundy from the years 1370-1380 [Murray 1952:120]. See David Parlett [2018:58] for the rules and the Dutch chapter 39 for quotations. The Dutch name of the board was verkeerbord, for instance noted down by a notary from Bruges in 1462 [Weyns 1974:1070].
Later (15th c.?) the Dutch onomatopoeia ticktacken came up: the name of the board was ticktackbert. Two examples: this name was used by the Flemish notary who in 1606 made up an inventory in Herentals and by his colleague from the north who in 1610 described the list of contents of the weaver of cloth Roeloff Gerrits from Amsterdam.
People played tables in the public house (chapter 38, chapter 39). The inventories from 1462, 1606 and 1610 confirm it was a family game too.
Were the names verkeerbord and ticktackbord a pars pro toto for the entire gaming box, so that they tell us that this piece of furniture was mainly used to play tables with?

Draughts
In 16th c. Netherlands draughts was a welknown game, played in all social classes (chapter 38). In 1671 the playwright J. No(o)semans made in his “Klucht van Krijn Onverstand of vrouwen parlement” (a farce) a comparison that proves he took it for granted his visitors were familiar with draughts: “’t Is of ze dammen, want sy slaen met dubbele slagen” (It looks like they are playing draughts because they take more than one piece ‒this is common in draughts on the 10×10 board).
In the 1920s a draughts player from Amsterdam did doctoral research into the Dutch shipping trade in the 16th and 17th c. His name was G. Bakker Wzn. (zn = zoon, son of W. Bakker). One of his sources were archives from notaries in Amsterdam and surrounding towns and villages. What he especially looked for is unknown to me, neither do I know if he succeeded in performing what he intended. Going through inventories he noted down gaming boards. Unfortunately not systematically, but nevertheless he contributed to the general picture.
Six times, Bakker noted the trade of the owner of the residence where a 17thc. notary noted a draughtboard. Three craftsmen: a maker of nails, a hatter and a maker of mattresses. Three representatives of the higher middle class: a dike graven (dike warden), a broker (state agent?) and a schepen. In Flanders, the name schepen is still used for an alderman of a town. In the northern Netherlands the name has become obsolete. In the past, in the north a schepen was a member of the local council. An important position, as the council also dealt with some juridical matters.
The oldest inventories make only mention of the tiktak/verkeerbord, said Bakker.
In the second half of the 16th c. the dambord (draughtboard) was appearing. Bakker’s first draughtboard is from 1599. Jacques van Hanswijk, Amsterdam, possessed, the notary noted, “1 dambert en 1 dambertje” (1 draughtboard and 1 little draughtboard). Older records of a dambord are from 1559 (Jaspers van Lantrop, steward [bailiff] in Rotselaar), from 1568 (potter Poppet in Saint Amand, Rijssel) and twice from 1569 (merchant Dirixse in Haarlem and a castle in Hoogstraten, province Gelderland).
These inventories make me a headache. Obviously, they describe a checkered board. Boards with how many squares? 64? In that case the board could have been a chessboard. Did the notary note down a draughtboard because chess was for him an almost unknown game so that he considered a 64 squares board as a board to play draughts? It might be possible. There seems to be, however, another (better?) explanation.
In the first half of the 17th c. there is an engraving of the French artist Charles David (1600-1636). Subject: a woman in Dutch clothes is playing draughts on a 10×10 board with a monkey, symbol of foolishness. There is a quatrain: Lors que la Maitresse s’absente / Le singe m’imite et ensuit, / Ie prens sa place et mon deduit / Et le Maitre au je represente. I cannot make head or tail of it, but do understand what David wanted to express: draughts on a 10×10 board is a folly pastime. My literal translation of the four lines: When Madame is leaving the monkey is imitating her. Then I take his place and am going to play a cozy game. Then I represent the Master. The quatrain may be a riddle, the engraving put the Dutch dambord records in a clear light: the Dutch played draughts on a board with 10×10 squares. 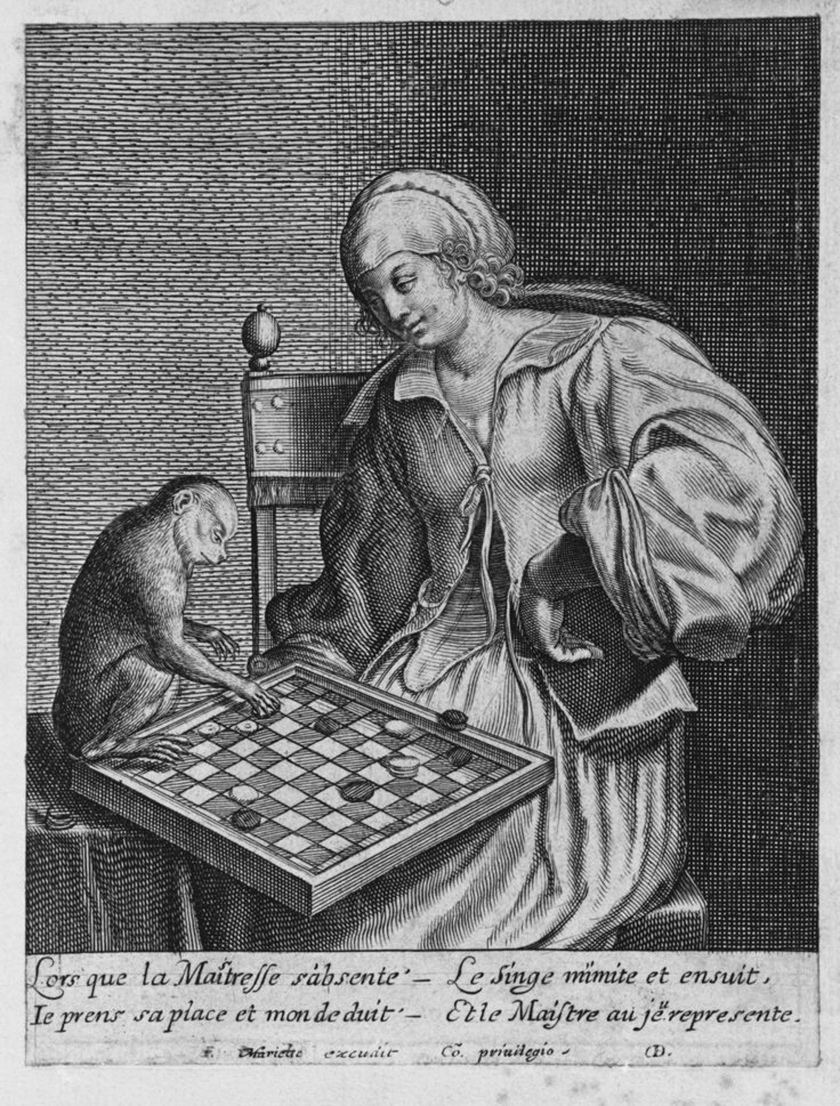 In 1599, the Fleming Cornelis Kiliaan, a leading lexicographer, distinguished two draughts varieties, both played on the 8×8 board. In chapter 39 I explained that this had to be a mistake: Kiliaan knew about two draughts varieties but was unaware of the 10×10 board. I doubt if this explanation does hold water, because two colleague lexicographers (in 1559 and 1568) seem to have been familiar with the 10×10 board and two Flemish notaries noted a draughtboard (in 1559 and 1568). Is it possible that in the southern Netherlands 10×10 draughts was already a common game in the second half of the 16th c.?

Chess
What about chess, did it enjoy some popularity in the Netherlands?
In Amsterdam and surrounding area the number of records of a chessboard, said Bakker Wzn., fell far behind the number of records of a draughtboard. Roeloff Gerrits, the cloth weaver from Amsterdam, owned in 1610 as we just saw a ticktackbert. But a schaeckpel too, i.e. chess pieces. Aeghe Jans from Amsterdam possessed in 1651 “een groot dambort” (a big draughtboard) and “een out schilderij sijnde een schaeckbord” (a painting that is a chess board). A chess board which had no inlaid squares but painted ones?
Records of a chessboard are tricky. When in some year the great majority of the draughts playing Dutchmen made the transfer to the 10×10 board, there remain people holding to the old familiar 8×8 board. In such a family the notary noted a chessboard where a draughtboard would be proper. We have to live with uncertainties.
In chapter 4 and chapter 5 I pointed out the phenomenon that in Spain draughts brought pressure on the promotion in chess. This happened in the second half of the 15th c.
In our days, the language of Dutch chess players does not make a distinction between the original queen and a queen as the result of the promotion of a pawn. In the past, however, Dutch chess players did make such a distinction: they gave the promoted queen the name of the promoted piece, the doubleton, in draughts. I enter into the Dutch name for the unpromoted and the promoted draughts piece in the past.
Before 1700, the Dutch word dam meant flat round piece, i.e. the unpromoted piece, singleton. The promoted piece (the king, the doubleton), like today symbolized by putting two pieces on top of one another, was called dubbel dam, literally double dam, so double piece.
In 1575 the Spaniard Juan Huarte wrote a philosophical work with the title “Examen de ingenios para las sciencas”. He devoted a passage to chess, explaining his ignorant compatriots that there is a piece called peon and that this piece can be promoted to dama, queen. In 1659, the Dutchman Henryk Takama translated the passage in his work “Onderzoek der byzondere vernuftens eygentlijkke abelheen” as follows: “Die soldaat (…) in het Schaak-spel, die met dubbel dam vereerdt wordt door dien hy zeeven parken behoudens lijf door is gekoomen” (the soldier in chess will be honoured by a double piece if it safely passed seven squares). Takama translated the Spanish word peon by the Dutch word soldaat = soldier, and the Spanish word dama by the Dutch concept dubbel dam.
In Spanish chess the promotion has actively been influenced by draughts. In the Netherlands the influence was limited to the chess language. Nevertheless that dubbel dam gives us information about the social position of draughts and chess: draughts a major game, chess took a poor position.
Chess was played, however ‒I jump to the first quarter of the 18th c. In his study, Carel Meijer followed a 19th c. closed association in Haarlem. The members gathered in a building of their own. They were from the upper middle class: there was a brewer, a wine-merchant, a quarrier, a bookseller and publisher, a plumber, a chandler, a butcher. The only dignitary was Mr. Nicolaus Six, steward of Rijnland [1891:64-5].
The aim was to find company, now and then a dinner or supper [1891:68]. And they played games, whatever they wished. Dicing, however, was forbidden, like tables (1721). Draughts and chess were allowed, just as card games. The stakes were prescribed: draughts not more than half a penny, chess not more than a penny. The stakes at card games differed form a quart penny to three pennies (ombre) [1891:75-6].
In the 18th c. the relation between draughts and chess did not change, see chapter 41.

The relation draughts-chess in figures
I incorporated Bakker’s information in my 20072 book:70-3,79. Although Bakker did not note down his figures in a systematic way, his figures even so give an image of the relation between draughts and chess. Between the late 16th c. and c. 1740 (or did Bakker mean the early 19th c.?, he was far from a clear communicator) Bakker noted in Amsterdam households more than 106 draughtboards against 8 chessboards. In smaller towns and in villages the noted in the period late 16th c. until early 19th c. 42 draughtboards against 0 chessboards. In that time chess was, we may conclude, a city game.