39. Tables in The Netherlands
This chapter is a preparation for chapter 40. To learn more on the position of chess and draughts in the Dutch 17th c., it is necessary to determine the position of tables. I repeat my earlier warning: a board game should be studied in coherence with other board games. Now and then I take a look in other centuries.
I use two sources: literature and the visual arts.

In the Dutch version of this chapter I quote fourteen sources where the author used the game of tables as a symbol for socordia, a collective noun for several negative activities, see De 17e-eeuwse Nederlandse literatuur.

The 17th c. painting
In his contribution to the iconography of Dutch painting, the German Konrad Renger [1970:103] points to the tables board as a symbol for socordia, i.e. slovenliness, sloth, folly, idleness. Probably since the middle of the 16th c. [Renger 1970:81]. In 1548, the German Heinrich Aldegrever made a series of engravings with virtues and vices, including a woman with a tables board as a symbol for socordia. The Dutchman E. de Jongh about symbolism in the 17th Dutch art: the game was usually connected with excessive drinking, fighting and lasciviousness [1976:109]. In the fourteen citations we spot the symbolism mentioned by Renger and de Jongh. On a higher level, tables can symbolize human life: just like life tables is a game of chance, it can be successful or bring trouble and misery [De Jongh 1976:110-1]. 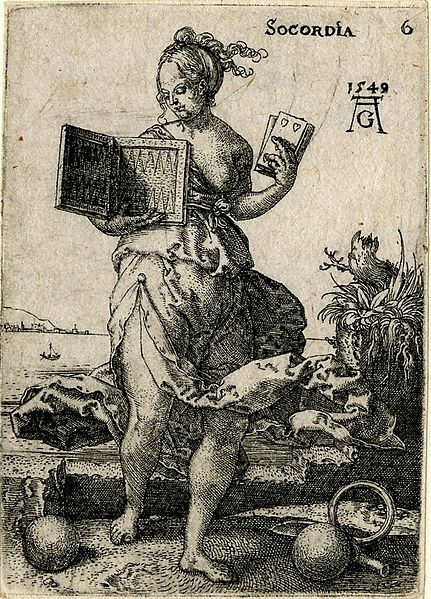 The guilty ones (sinners) are playing on the opened gaming box. The closed box always had a 64 squares pattern and often a morris pattern. See for the gaming box chapter 33. Below a typically English couple playing tables on an opened gaming box.
Many 16th and 17th c. artists, said Renger [1970:9-16], used the biblical parable of the Lost Son as a motive. They put him in a public house, surrounded by the temptations of the world, dangers which threaten the human on the narrow path of virtue. In the literary arts we see the same. Artists don’t depict the reality, they arrange it [Renger 1970:13,44; Jongh 1976:6-18]. As a matter of fact, the public house was an allegory of life.
Within the allegorical framework figures and objects have an allegorical function. A woman in the company of drinking man for instance personifies immoral love, the chat is a symbol of the love of a whore [Renger 1970:67,80,130]. 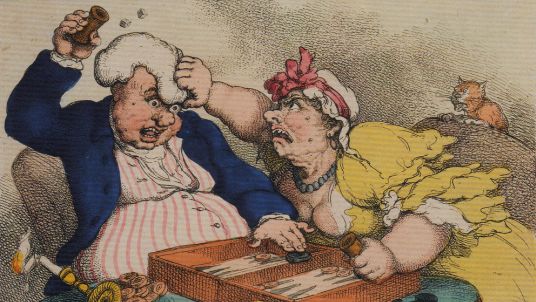 The social position of tables
Tables was a popular game with the medieval nobility. For the greater part the inventories quoted in chapter 13 are French and they consequently give a picture of the French medieval culture. The cultural contacts between the southern Netherlands and France, however, were close. Flemish writers, to give an example, translated French romances of chivalry, and soon the northern parts of the Netherlands made acquaintance with the French phantasy.

Dutch medieval inventories of the gaming board give us the same image as French inventories. Some examples. Item on an account for count Willem IV of Holland from the period 1340-3: “2 scaecsborde ende scaecspel ende sciven” (two chess board with chess pieces and round flat gaming pieces). The clerk called the board a chess board. The common name is tafelbert (cf. French tablier). Between 1384 and 1407, the city of Bruges offered the duchess of Brabant “een scakebordt ende tafelbord (…) metten spele datter toe behorende was” (a chess board and gaming board with the pieces belonging to it).
Just like in France, in the medieval Netherlands tables was a respectable game. After the Middle Ages too, the Dutch literature and visual arts sketch a one-sided image of the game. Two examples. In the 16th c. esquire Arend van Dorp was known as a good player of tables, and Willem Frederik van Nassau-Dietz, stadtholder (governor, viceregent) of Friesland (this province was Dutch but had its own government), noted in his diary on February 20 and 24 1645 to have played tables with four gentlemen.
Hans van Koolbergen [1983:46] came across two tables boards in c. 80 17th c. inventories in the small town of Weesp, with a rich inhabitant and an inhabitant of the middle class.
In the 17th c. a new drink overran Europe from the Middle East: coffee. Drinking coffee out became fashionable: the coffee house sprang up. In The Netherlands, the first house opened its doors in 1656 [Wysenbeek 1994:36].
The book written by Thera Francine Wijsenbeek together with Pim Reinders (1994) gives a picture of the 18th c. Dutch coffee house. It was frequented by the well-to-do from the society: intellectuals, dignitaries, merchants [Wijsenbeek 1994:48-9]. They played draughts and tables, said the writer Willem van Swaanenburg in 1725. The French-Dutch lexicographer Pierre Marin in his 1710 dictionary: “In the Dutch coffee houses draughts is a well-known game”. Marin lived in Amsterdam.
Tables was also played in the inn, the domain of the common man, Swaanenburg wrote. And they played cards too. In the coffee house not (yet?).
In the second half of the 18th c, tables became obsolete. Francq van Berkhey [1776:1431]: the game of tables, in the past so general, is only played by some elder people. Koolbergen [1983:33,51] noted his last tables board in a private residence in Weesp in 1766, in a public house in 1769. Wijsenbeek [1987:273] noted in the city of Delft in the 18th c. tables boards in all social classes; from the 1770s the number of tables boards strongly decreased.
In the second half of the 19th c, the game of tables seems to have undergone some revival. Marie van Dijk [1983:65] found the board in the properties of financially and socially prosperous Dutch families.

Notarial deeds
Contrary to most of the European countries, in The Netherlands many notarial archives were kept from revolution or other calamities (this is not a political statement). They bring a wealth of information on the past, answer a lot of questions. Such as: How many rich and how many poor families were living in a city as Delft in the 17th c.? What kind of household goods did possess a rich family? And a poor one? And social classes between these two extremes?
Gaming boards were often part of the household. Which kind of board? A gaming box, we may expect, see the pictures. The fourteen writers used the name ticketack and verkeerbord. These were obviously specific names for the tables pattern, as the 17th c. inventories seldom contained one of these two names. What then was the name of the gaming box? It must have been dambord (draughtboard), there is no other candidate. I see a parallel with France. The French called the gaming box a draughtboard: they took the box so often out of the cupboard to play draughts that they identified the piece of furniture with draughts, see chapter 37.
Sometimes, the notary noted down the board name schaakbord (chessboard). Why: the 64 squares pattern is part of the gaming box. And what about the 100 squares board? Two puzzles for chapter 40.

Tables: two main varieties
To conclude some words about the varieties.
The Dutch texts distinguish between verkeren and ticktacken. In 1658, Jean Mommaert from Brussels published a booklet about it entitled “Stichtelyck ende vermakelyck proces tuschen dry edellieden (…)” (instructive and amusing interplay between three noblemen). One of the persons introduced by him ran down the game called verkeren: it lasts too long and you cannot earn much. He prefers Naemsch ticktack (tables from Namur), much played in Brussels. In France he learned Great tables. These main varieties have several sub varieties.
Question: is Groot-ticktack the same game as the French Grand Trictrac? According to Parlett [2018:86] Grand Trictrac is a 18th c. name and variety.