16. Invisible chess
In our time with its abound in options, many a child hops from club to club before chosing ballet, brass band or hockey. Such a choice is often for a lifetime. An addiction, am I allowed to typify it like that? But an addiction of the pleasant kind.
Worried educators caution for the smart phone, the X-box and hardware like that: adescolents get addicted. It is an unanswered question whether this unpleasant addiction can last a whole life. Adescolents can also get addicted to chess or draughts. The seductiveness of these two board games can continue until one’s death; that’s why a tournament draws many retired players and watchers.
“The human is a creature of moods” (?). I cast doubt here seeing these photo’s from the Tata Chess Tournement 2018. 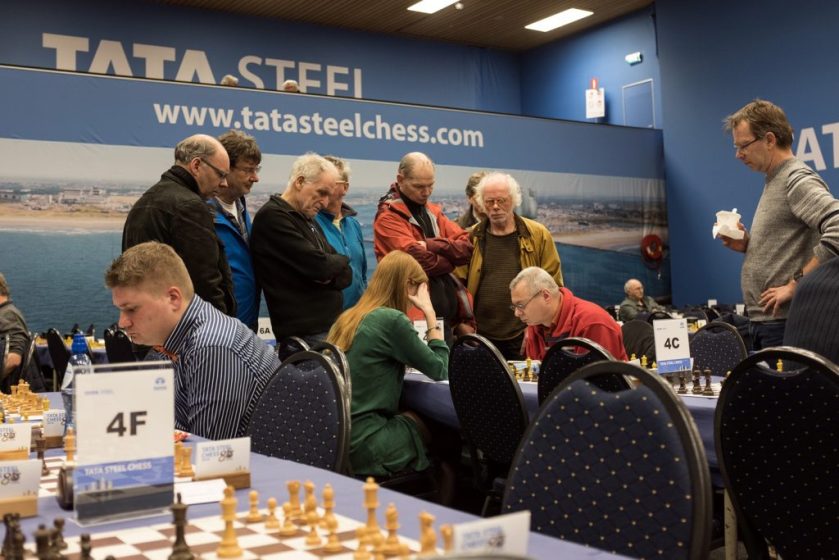 Another example. We have all seen images of the Syrian city Homs (photo’s below) before and after the destruction. It needed fighters of all kinds of parties some years. The infrastructure, say the richness of ideas, of the inhabitants of Homs who survived, has been destroyed less radically than the infrastructure of their city, another way of thinking takes more time than a couple of years. We cannot expect from a refugee from Homs who is admitted in England that he immediately adopts the English conventions and values.
I recognize now the children of the Syrian family in the street of my greengrocer’s. The young mother is invisible behind thick curtains, but I know she is there. How will husband and wife look to the lesbian couple in their street? I believe they want to adjust to the Dutch values, but their mind does not cooperate, it clings to what is familiar.

Did the human mind work more flexible in the past? I cannot imagine. A nobleman, a representative of the higher civil class or a higher prelate of the Roman Catholic Church can impossibly have suddenly decided to cease playing chess. And yet they did it at a large scale, all those people who earlier were crazy about chess. How do I know? Well, the fact is that in France something similar happened as two centuries earlier in England. Chess players there did not say “We play chess” but “We play at the checker”. As soon as the English draughts players made the transfer from the lined board to the chessboard, they nabbed that To play at the checker from the chess players. In France, the players of tables needed a new name for their game, the common Jeu de tables was becoming obsolete. They chose Jeu des eschecs, a name meaning chess. Click here for the linguistic background.
Our communication depends on the stability of our words: words cannot disappear all the time, they must keep their meaning, otherwise we lose our grip on the world. In England as well as in France it went wrong, how could it happen? That in 14th c. England To play at the checker lost its meaning chess, proves that in England chess had a weak social position, see chapter 15. The same applies for 16th c. France: players of tables could only mention their game Jeu des eschecs if this game name was hardly used, at least not by the general public. Chess was in France not a dead game, between 1500 and 1700 several chess books were published [Eales 1985:87,91-2,98,100]. For the millions, however, chess must have been invisible. So, there were few chess players and those few played the game in a closed circle.
I just wrote that in 1500 all members of the French high society stopped playing chess. I withdraw it, it is utter nonsense. Psychological rubbish, once a chess players always a chess player. And I have never heard about a kind of elite ebola that in 1500 slayed representatives of the better classes by the dozens. Well then, when chess was hardly played in the 16th c., the position of the game cannot have been better in the 15th c. Here however, I clash with the tradition, imploring me that in the Middle Ages chess was unequalled popular.
Is it possible that chess was very often played until say 1450 and in the second half of the 15th c. lost its popularity? No. At least I cannot find any indication for this supposition, compare for example 15th c. inventories with inventories from the 14th c. and with the the citations from the 15th c. literature in Murray’s “History of chess” with his citations from earlier centuries. I stuck to my conclusion: in medieval France chess has been far from popular. Stating this, I come into collision with the tradition, which assures me that in the Middle Ages chess was unparallelled popular. So I have to prove in chapter 17 that our knowledge of the position of chess is not more than an assumption. And when I fail? H’m; then I’ll have a problem.