15. Chess and draughts in medieval England
I am on my way to define the social position and popularity of the four great board games of the Middle Ages: chess, tables, draughts and morris. In chapter 13 and 14 I establish, based on especially French gaming material, that the peerage played both tables and chess. However, sources of that kind are limited: they don’t tell us anything about the popularity of a game. But an analysis of the English game name checkers does.
Words with their meaning have a central position in our language, our most important means of communication. If heaps of words would disappear or lose their meaning in a continuous process, it would inconvenience us a lot. For this reason, words for essential matters in our life stand strong, they have an eternal life to say so. Statistics underpin it: more than 97% of the medieval words the Dutch still use kept their (main) sense. Over the ages they could have got a slightly changed form or pronunciation, that’s all. There is no reason why this should not be true for English.
Because of this, we can in the 21st c. rather easily read a text from the Middle Ages. I give an example from the late 13th c. where the author mentioned board games.
A line from the romance of chivalry “Robert of Gloucester”, finished in 1297: “With pleyn atte tables. Other atte chekere”. We have to get used to the construction: the medieval (wo)man said literally: “to play at the board for tables” and “to play on the checkered board”. 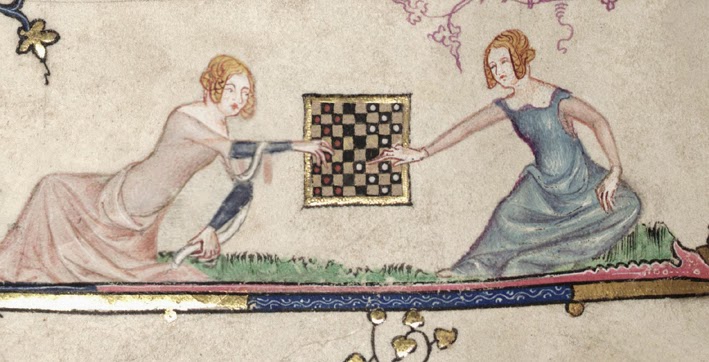 In 1297, the latter construction did not cause troubles: the checkered board was only used for chess (and for a kind of roulette: a player threw a coin after having bet on the color of the square where it would land). However, as soon as continental draughts players made their transfer from the lined board to the checkered board, between 1300 and 1350 ‒but I cannot exclude the English made the transfer earlier and exported draughts on the chess board to the continent‒, the English had to answer the question: “How do we call this game on the checkered board?”
Their choice seems predictable: the construction to play at the checker is as sure as eggs, because chess was the great board game of the Middle Ages, we all believe. If this tallies with the reality, it is clear: the construction meant chess and would mean chess for many a long day.

This image, however, is in chatters, for see the two following quotations from more than an age after “Robert of Gloucester”.
The first quotation is taken from “Jacob’s Well”, written in the first quarter of the 15th c.: (…) to do ydell dedys, that arn werkys of no profyzt, as to pleyin at the tablys, the chess & the chekyr, at the hazard, at swyche othere vayn pleyis. In present spelling: to do idle deeds that are works of no profit, as to play tables, chess & checkers, at the hazard, at such other vain plays.
A contemporary of the unknown moralist who wrote “Jacob’s Well”, was John Lydgate. In his “The pilgrimage of the life of man” from 1426, the translation of a French work, he described the human being in his journey through life. And this human being played games: (…) both at ches and the cheker, the drawthes thereof, ful wel I kan, ye bet than other man (…) at the merellys (morris or line draughts?), best of alle.
What happened? Well, English draughts players started to play their game on the chess board. A Londoner invited his neighbour: “Shall we play at the checker?” They simply stole the construction from chess players, just like that. This proves  that chess was a game that was far from popular, otherwise it would have been impossible. Compare it with a street mugging. If chess would have been a fine figure of a man, a mugger could never seize his chance. But chess was no burly fellow. Chess was a runt guy, who trembling with fear handed his bank card included the PIN code over tot the bundle of muscles who menacing bent over to him: the game of draughts.
In France also draughts was a game with muscles and chess a runty game, as I shall prove.
Click here for a more linguistical analysis.