32. England versus the United States
My analysis of the English game names checkers and draughts proves once more how linguistics contributes to our knowledge of the past.
First to our knowledge of draughts. From the 14th c. onwards draughts was called checkers. A player could capture or refuse it. In the 15th c. a partial obligation to take was introduced: the English gave this variety the name draughts. During a long time, the English played both varieties; probably checkers became obsolete in the first half of the 17th c. (chapter 31).
Secondly linguistics contributes to our knowledge of chess in England. Under social pressure of draughts players, chess players exchanged the name for their game, checkers, for the new name chess (14th c.). This proves that draughts was a very popular game and chess only a minor game (chapter 15). This result rectifies our perception of the medieval knight. The image of knights wo gladly and often played chess belongs, however, to our collective truths, and how long does it take in such a case before it will be replaced by a more balanced image?
In the case of the game names checkers and draughts a third question is awaiting an answer: why is the name for draughts in the United States checkers and in England draughts? For this purpose, we (briefly) consider some events in the British history.

The colonization of North-America
Nations in South- and North-America got their general language from European colonizers: Portugal, Spain, England.
From 1585 England sends ships to regions that are today inside the borders of the United States of America to gain base materials and to create a new market for English products. The first effort, in present North-Caroline (1585) fails. In 1606 there is a new effort: English colonizers settle in a region they name Virginia (after their unmarried and therefore virginal queen Elisabeth). However, they clash with an Indian tribe. It does restrain the English to venture a third crossing, and a fourth, a fifth, a sixth. And all the English settlers carry their native language with them, included the words checkers and draughts.
Something is wrong. In 1585 and 1606 the English are playing draughts with the huff for one century ‒ at least. In 1653 Thomas Urquhart does not know the old medieval draughts variety including the game name checkers (chapter 31). What about it? Did English draughts players hold to the ancient game with the free capture until let us say 1630 and did they after massively convert to the variety with the huff? There is an explanation that in my opinion cuts more ice: the English people who cross the Atlantic wish to lead a life just as it says in the Bible and take an exceedingly conservative line in other aspects of life ‒ at any rate in the eyes of dissenters. I may assume they stick to the draughts variety of their forefathers and their name for the game: checkers.

The Pilgrim Fathers
The group that served as a model for the stream of Puritans who left England between 1585 and 1670 ‒in June 1630 for instance fourteen sailing vessels with emigrants left the harbors of Bristol, Plymouth and Southampton‒ seeking for religious freedom are the Pilgrim Fathers. They represented the third group of English settlers that reached America: in 1620 they landed with their ship Mayflower on the coast of Massachusetts. It was not their intention: they should join their compatriots in North-Virginia but the wind blew them off course. More than half of them did not survive the winter of 1620-1621, in spite of the support of Indian tribes. Below the impression of the Mayflower by the English painter William Halsall.

The Mayflower had left from Southampton. The greater part of the group were English people living in England. A smaller part were English people who had lived in Holland between 1609 and 1620, first in Amsterdam, then in Leyden. They did not get mixed up in English refugees in both cities, afraid to get tainted with pernicious ideas that would affect the purity of their belief. And they had to live amidst many members of a nation who did not testify, they observed, in a proper way. For most of them these were the reasons ‒outside of this their economic situation was not very rosy‒ to build in the New World a society which they could organize in the way God desired from the human, or in other words to found God’s kingdom on earth. The call in our time to found a caliphate that evokes the days of Mohammed is comparable.
In the Netherlands, memorials of Leiden, see below ‒and there is the small Leiden American Pilgrim Museum‒ and Delfshaven (today a quarter of Rotterdam) recall the Pilgrim Fathers. In the USA the Mayflower Society cherishes their memory. There is a story that Thanksgiving Day, celebrated the fourth Thursday of October, is connected with the Pilgrim Fathers. Leiden commemorates every 3rd October that the residents succeeded in chasing on this day the Spanish troops that besieged the city ‒between 1568 and 1648 there was a war between Spain and the Netherlands‒ and it is said the Fathers had adopted this cerebration. The story cannot be true: the 3rd October is only celebrated since the late 19th c. 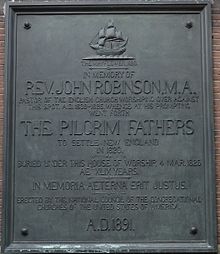 Puritans
In the society English Roundheads (Puritans) aimed for, the Bible was the touchstone. God was the central, every minute of the day should be dedicated to Him. The Puritans wanted to expel everything that could lead the human mind away from serving Him, as drama and arts. They loathed the Roman Catholic Church with its Maria cult and cohorts of saints. It led to a clash with the Anglican Church with its similarities with the Roman Catholics. And they failed to persuade their compatriots to pass their Sundays praying and to carry sinful materal like paintings and drawings, tables boards, playing cards and dice outside and burn everything in a bonfire.
The Puritans did not only come into conflict with the clerical authorities. Also the secular authorities had difficulties with people who continually insisted on closing the theatres and would retrain artists to useful professions as carpenters and bricklayers and cried out against every activity that could disturb their Sunday observance. The Pilgrim Fathers, who left their mother country in 1696 to settle in Holland, felt themselves chased off by their English compatriots, all unbelievers who refused God’s love. Their eyes were so heavenwards oriented that there was no room to look after those who did not share their perception, so that they did not learn to look to themselves from the position of the other. 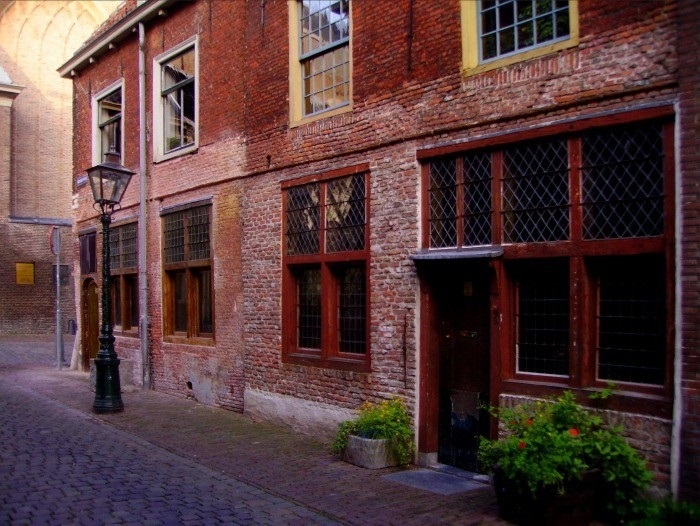 Below attention for related subjects.

Puritan preachers on the European continent
In the 15th and 16th c., Catholic clergymen regularly whipped up inhabitants of the continent with fire-and-brimstone sermons to dispose immediately of their rings, their ornamented belts and so on and to throw them in the fire that burnt already. And tomorrow there would be a new fire, so that they could throw their dice, playing cards and other temptations of the devil into the flames to leave their sinful life behind and get prospect on an eternal life in one of the seven heavens. As far as I know the English Puritans never made themselves guilty of such incitement, neither did their kindred souls on the continent. Some catholic incidents.
In 1428 a certain Father Thomas traversed Flanders. He preached so convincingly that all sheep laid their “tabliers” (boards for tables), “échiquiers” (boards for chess: imposssible, falsification of of history by Victor Gay) and “cartes” (playing cards) at his feet [Stoep 1984:37]. One year later something similar occurred in Paris, after a sermon of Reverend Richard: hundreds of Parisians threw their “tables” (gaming pieces), “tabliers”, “cartes” and “billes” (little balls for a game) on a pile to have them burnt. Jacomin Husson, writer of the “Chronique de Metz”, told about a Franciscan Friar Minor who preached compellingly and implored the inhabitants of Metz neither to wear rings, necklaces and necklets or decorated belts nor to keep dice, playing cards and gaming boards in their houses because this was all deadly sin. The chronicler himself threw six decks of cards, about 25 dice, more than 70 gaming pieces and two gaming boards on the fire [Stoep 1984:37].
There are similar reports from other countries. According to an eyewitness the Italian star preacher Johannes Capistranus, a Franciscan friar, made in the German city Erfurt and neighborhood a fire of all kinds of sinful material he collected, it was the Lord’s Day August 10, 1452: 3.640 gaming boards, 40.000 dice, uncountable playing cards and 72 sledges. How the man from Erfurt has been able to count this all, it’s a puzzle to me. In Italy the good man, Capistranus, had Catholics burnt who in secret were in league with the devil (“magicians”), in Breslau 1452 he was responsible for the death of Jews. Pope Alexander VII canonized him in 1490. ‘You must explain such things in the context of the time Arie’, I severely speak to myself.
In the early 16th c. Hans Leonhard Schäufelein brought the Erfurt event in vision [Zangs 1994:114]. 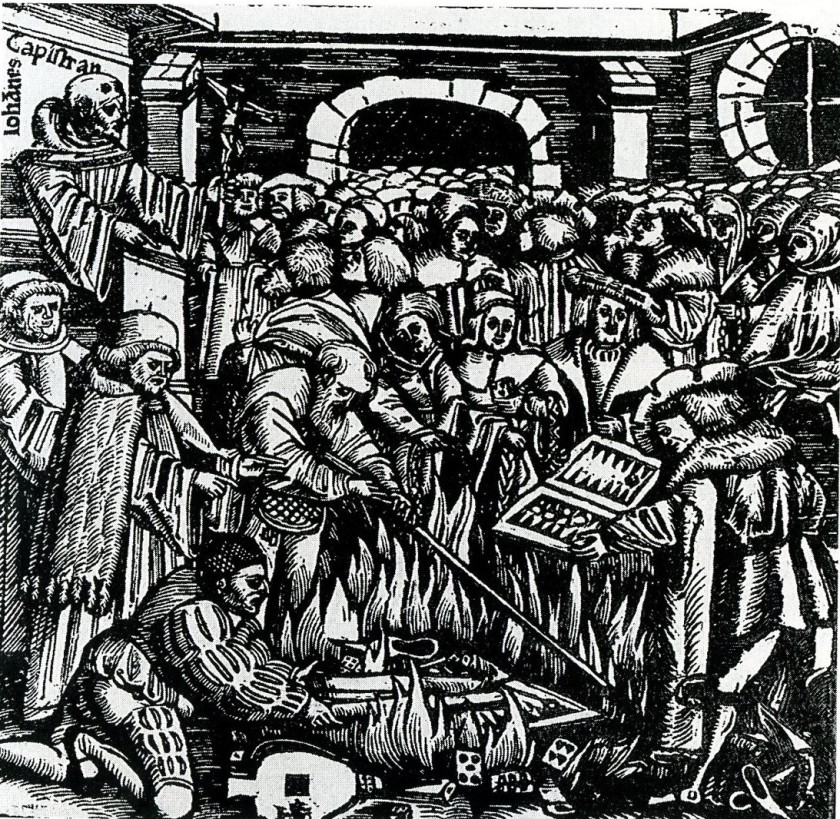 Dutch protestants and draughts and chess
In the 19th c, rigid Calvinists, the moral brothers of the Pilgrim Fathers, repudiated chess: that game was played with kings. There was, of course, not more than one King and this King resided in Heaven, they considered the kings on earth as His reflection. It might be possible, I don’t have a better explanation.
Playing draughts, on the contrary, was permitted. I wonder how the groupings in this chapter think about the etymological proposition launched by the German Marxist historian Joachim Petzold [1986:151,153]: the name of the 15th c. chess queen, dama, was a tribute to Maria, mother of God (chapter 4). Or do they shrug their shoulders as it is flagrantly incredible?
The Pilgrim Fathers and other Puritans, did they play chess? It is not known to me. I don’t think so, as in 17th c. England chess was not generally spread.
They repudiated playing cards. The Calvinistic Dutchman did not play cards either ‒a pack of cards was called “the devil’s picture book”‒, and dicing was wicked too. Obviously draughts was permitted, English Puritans must have introduced it in America; if not I cannot explain why draughts got in the States the name checkers.
With this way of reasoning I implicitly assume that draughts was introduced in North-America by English settlers and that the Indians did not know the game. Considering the European origin of draughts the assumption that the Indians played draugths already does not seem plausible.
By the way, the ideas of the Pilgrim Fathers survive in the Netherlands to this very day among a pietistic branch we call Dutch Reformed Church (comparable with the Free Presbyterians).