9. Arab influence in medieval Spain
The engraving bottom left has an “Arab” feature: the raised pieces. I took it from a draughts book printed in 1684 by order of Joseph Carlos Garcez y de la Sierra Boil de Arenas [Westerveld 1997:291]. The engraving bottom right, from the draughts book published by the Frenchman Pierre Mallet in 1668, has a “Roman” feature: the flat circular pieces. 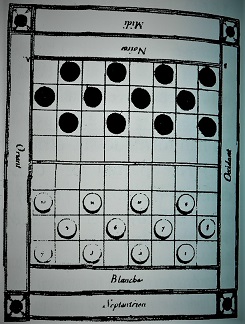 In spite of the differences, Spain and France are kindred cultures, with their Roman Catholic religion and their languages that are continuations of Latin dialects. How then could Garcez play draughts with Arab gaming pieces?
Well, in 711 AD Arab tribes, we call them Moors, crossed in small boats the Mediterranean from North Africa to the Iberian Peninsula. In no time they overran Spain and Portugal. Roman Catholic Europe was aghast: those Mohammedans were threatening Christianity! Where did I hear it earlier. It expanded to an age-long conflict, where the Christian allies drove the occupies more and more to Southern Spain. In 1496 the last Moorish bulwark, Granada, succumbed to the troops under the command of queen Isabella and her husband.
I mentioned Isabella’s name before: the new Spanish energetic queen was said to be modelled on her. She was very Roman Catholic. Some years earlier, in 1492, she had forcefully acted against the representatives of a second superstition that endangered the spiritual welfare of her citizens: the Jews. Where did I hear it earlier. Isabella gave them the choice to convert to the true faith or the leave, euphemism for being horribly chased off. A second example of Isabella’s vigor.
In the center of Andalusia lies the city of Sevilla. Three centuries before Isabella, Alfonso X, king of Castile and León, hold court here. Where Isabella parted, Alfonso united. He was not only a king but also a scholar, who opened his palace for Arabs, Jewish and Spanish scholars of all kinds of science disciplines. He had Arab and Jewish works translated into Latin and Spanish and thereby he functioned as an intermediary of cultural transfer from the Middle East to the West. The Arab culture had a much higher standard than the Christians. Arabians founded for example libraries long before the Christian civilization. A concrete Arab achievement in our everyday life: we calculate with Arabic numerals and not with the difficult Roman system. 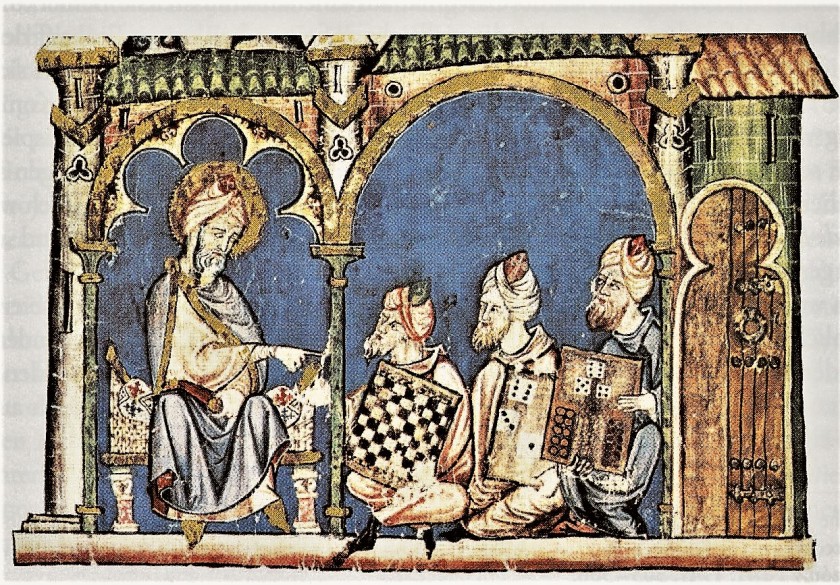 Not long before this death, Alfonso commissioned to describe the board games played in his neighborhood. His clerks finished the splendidly illustrated manuscript written in Spanish in 1283. Above, Alfonso (left) is receiving three wise men who present him games.
With my focus on board games, three Arabic features in the manuscript are striking me.
First the raised pieces.
Secondly the great attention to chess, see for instance the many chess problems [Schädler & Calvo 2009]. Tables gets a lot of pages also, but not so many. In Western Europe, there was more interest of nobility in tables, as I shall prove. A game as morris only gets a short description.
Together with other games, morris bears, in the third place, a name that did not occur elsewhere in Europe. In chapter 10, I shall enter at length into this name.