52. About intellectueals
A fascinating question: How did chess get its image of intellectual game? Seeking the answer in intrinsic aspects is useless: chess is a two-dimensional game, draughts a richer board game because three-dimensional (chapter 48).

External aspects
Are external aspects of some importance? It certainly counts, artists designed many beautifully sets of chess pieces. Playing a game with such pieces must give an esthetic pleasure. I wonder, to what extent a reaction of the Dutchman Petrus Kersteman (“Compared with chess draughts is a children’s game”, chapter 42) and the reactions of several 18th c. French chess players (“Only a man with superior capacities can play chess”, chapter 43) are bound up with aesthetic. Intellectuals as Chevalier de Jaucourt and Denis Diderot thought quite different: “Some of the greatest intellectuals remain poor players” (chapter 43).
One of the intellectuals the two Frenchman hinted at was Jean-Jacques Rousseau, in his time so famous that it was not needed to use his family name. Jean-Jacques sufficed, everybody knew who he was. I go in on him in more detail.

Jean-Jacques Rousseau
Jean-Jacques Rousseau (portrait above) (1712-1778) was a man of merit for cultural life in France. Undoubtedly, his greatest merit was his view on education, set down in the novel “Emile”. Furthermore, he published his constructs on the rights the members of a society should have. For the “Encyclopédie” he wrote articles about politics and music. And like François-André Philidor he was a composer of music.
To note down thoughts is one, to note them down readable and compelling is two, and Rousseau was capable to it. Because of this, his “Confessions” about his evil qualities (his falseness, his delusions, his masochism), edited after his death, are so accessible.
About 1733, Rousseau wrote in this work, I did my utmost to become a good chess player. Harry Golombek [1976:116-7] translated the passage in question.
At Chambéry (a town in the French Alps) there was a Genevese named M. Bagueret, who had been employed by Peter the Great at the Russian court; he was one of the greatest rascals and greatest fools, said Rousseau, that I have ever seen. The man asked Rousseau’s attention, although Rousseau disliked him. “He saw it, never a difficult matter in my case”.
In spite of this the man “took it into his head to propose to teach me chess, which he himself played a little. I tried it, almost against my inclination, and, after I had learned the moves indifferently, I made such rapid progress that, before the end of the first sitting, I was able to give him the rooks which at first he had given me. That was enough, I made for chess from that moment”.
Rousseau continued: “I bought a chessboard, I bought a chess book. I shut myself up in my room and spent days and nights in trying to learn all the openings by heart, in stuffing hem into my head by force, and in playing by myself without rest or relaxation. After two or three months of this praiseworthy occupation and thee incredible efforts, I went to the café, thin, sallow and almost stupid. I tried my hand, I played again with M. Bagueret, he beat me once, twice, twenty times; all the different combinations had become mixed up in my head, and my imagination was so enfeebled that I saw nothing but a cloud before my eyes. Whenever I wished, with the help of Philidor and Stamma, to practice myself in studying different games, the same thing happened to me: and after exhausting myself with fatigue, I found myself weaker than before”.
By the way, Philidor discouraged from this method: you can learn openings by heart but after four or fives moves you have to continue with your own head.
“When I left my room”, Rousseau wrote, “I looked like a corpse. If I had continued to live in the same manner I should certainly not have remained long above ground”. 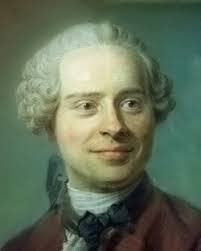 Chess playing intellectuals (1)
Richard Eales mentioned the fourth chapter of his book “The game of the intellectuals 1650-1800”. The principal idea in this chapter is that this time brought forth players who better understood the essence of chess than their predecessors and who were able to pass on their insights. One of them was Philidor. Quote: “And after 1650 there was further progress, despite the absence of great players, because the advance that had been made in chess theory since the time of Lopez began to find their way into print and become more widely known” [1985:96]. Lopez is the Spanish priest Ruiz Lopez, who in 1561 explained in four volumes how chess should be played. With that chess became a game you could learn, and because of this aspect intellects got interested, Eales argued.
On the subscription list of Philidor’s 1777 book, edited in a French and English version, the name Rousseau was lacking. Philidor and Rousseau were acquainted. I don’t how well, neither if they had met at the chess board. It was not lack of interest that Rousseau did not subscribe, it was his physical condition; he was relatively young, 65, but he had not long to live.
Between the 280 names on the list names of some intellectual celebrities. Eales [1985:117] called five of them: the French Marmontel, Suard, Voltaire and Diderot, and the Englishman Gibbon. About each of those names some details.
Jean-François Marmontel (1723-1799) was a novelist, playwright and poet, but showed interest in history and philosophy too. He contributed to the encyclopedia which had been established under the responsibility of Denis Diderot and. Jean Le Rond d’Alembert. This work, the first one of this kind, was unrelated to the three sectors which in France represented the power: universities, church and royal house. What ‘s more, the “Encyclopédie” criticized these institutions. And compatriots because they puffed around because they played that superior chess, see above.
Jean Baptiste Suard (1732-1817) was the editor of two rather progressive periodicals, although he was less critical than Diderot and his co-workers. Contrary to the people who cooperated to the “Encyclopédie” he was nominated for the Académie française, the highest honor which could be paid an intellectual. The first nomination was declined because the Establishment did not accept him: there were whispers he should be on friendly terms with d’Alembert and even write for his encyclopedia. After the second nomination he was admitted in Académie, even the king (Louis XV) approved it.

François Arouet de Voltaire (portrait above) (1694-1778), writer of essays and plays, had been earlier asked as a member of the Académie. Remarkable, because he was a very critical mind, who in his unruly youth was even some times imprisoned because he offended dignitaries. In 1748 he stayed at the court of Stanislas Leszczyṅski, whose name I mention because he will play some role in a future chapter. On year later Voltaire accepted an invitation of Frederick the Great of Prussia for a longer stay at his court in Potsdam. This as an illustration of the milieu Voltaire was in.
The Englishman Edward Gibbon (1737-1794) led a less adventurous life than Voltaire. He was an historian with a great interest in the Roman culture, especially the decline, and during some years he was a member of the English parliament. But he too thought outside the borders the leading powers wanted to prescribe; during a period he was in Paris for example, he tried to get in touch with Diderot and d’Alembert.

Denis Diderot (portrait above) (1713-1784) wrote plays and was an art critic, but his most important contribution was his work on the “Encyclopédie”: it published 72.000 articles, he wrote about 6.000 of them. He was one of Philidor’s patrons, he wrote for example the letter Philidor in 1771 checked in with in London with Charles Burney (chapter 44): Mr. Burney would not regret if he would accommodate Philidor, Diderot could guarantee it. Diderot found a kindred critical soul in Voltaire.

Chess playing intellectuals (2)
Further research refutes Eales’ assumption that in the 17th and 18th c. chess received the predicate intellectual game. In the next chapter more about it.