47. Philidor, chess and draughts player
From December 1745 until January 1747, the young André Philidor ‒he celebrated his twentieth birthday there‒ was stuck in the baggy Holland, country of fog and sludge. What did save him? Draughts! If he had not been such a strong draughts player he had died on an ice-cold ‒the emission which would lead to the present lingering winters without frost but with parades of rain clouds from the Atlantic had just started‒ shabby garret in Rotterdam, a tramp who scratched about in the clothes of a gentleman. ”Pinched, what else?, such a bum”. I hear my ancestor’s gossip behind his back. Not mine, they did not live in a town. I emanate from a stock of farmers, the roots go back to the 16th c. It was the most boring farmers of the world, as appears from the data of a far unknown family member who drew up a genealogical tree. None of them had even the guts to commit a crime passional, like in Philidor’s Paris, or to beget a child by a woman of rank, again like in Philidor’s Paris. Or did the unknow withhold me all kinds of juicy details?

Philidor’s playing strength
Chess historians sing about Philidor as the strongest chess player of his time. How strong did he play draughts? The “Encyclopédie” of Jean le Rond d’Alembert, mathematician, physicist and philosopher, and Denis Diderot, writer, philosopher, art critic but especially champion of a rational approach of the world, calls Philidor not only a first-rate chess player but also a first-rate draughts player [1755 V:247].
A first-rate draughts player? No, Pierre Marin did not mention this in his 1787 book. Philidor was an experienced player, that is certain, the fragments of two games he played in Café Manoury and the two combinations he composed, noted down by contemporaries, prove it [Stoep 2007:99]. 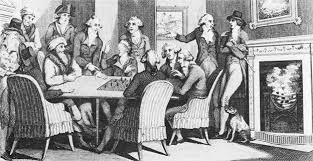 Philidor played blindfold
Is the ability to play a game of chess or draughts blindfold a proof of playing strength? I enter into the subject blindfold play.
Philidor created a sensation when he played two games of blindfold chess in the Parisian Café de la Régence in 1744. In those days it was forgotten that Spanish and Italian chess players earlier played three blindfold games at the same time. Giovanni Girolamo Saccheri (Sacchieri) from Turin (1667–1733) combined three simultaneous blindfold games with solving the most complicated mathematic puzzles, a real show [Keessen & Stoep 1982:72]. In the 1780s Philidor replenished his income by giving blindfold simuls in the London chess club and asking non-members five-shilling entrance [Eales 1985:118].
He did not succeed, however, in playing a game of draughts, he chucked in the twelfth or fourteenth move [Keessen & Stoep 1982:35].
My part of departure of a comparison between Philidor’s success. In blindfold chess and failure in blindfold draughts is the assumption that the ability to blindfold play is the result of a number of underlying skills. Well then, when Philidor could play a good game of blindfold chess but not a game of blindfold draughts, should I then seek the explanation in the difference of playing strength and conclude he played chess much better than draughts? The conclusion seems evident but is possibly to simple, see below.

Records
In their monography on blindfold chess and blindfold draughts, Nico Keessen & Arie van der Stoep establish a difference what cries out for an explanation: the record number of chess games in a blindfold simul is much higher than the record number in draughts. On the site chess.com I found a recent article under the heading “The seven most fantastic chess records”. One of these records regarded blindfold play. “Timur Gareyev (photo) set up a new world record in this discipline on December 3 and 4, 2016, when he simultaneously played against 48 opponents. He won 35 games, drew 7 games and lost 6 games”. 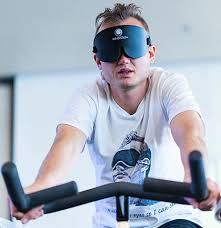 Is this a record indeed? Keessen & Stoep [1982:74] mention the Hungarian János Flesch, Budapest 1960, with 52 games and Budapest 1970 with 52 or 62 games, the sources give different numbers. George Koltanowski, born in Belgium but later naturalized to American, played in San Francisco in 1960 against 56 men. This was not simultaneously, however, he floored his opponent one after another. Hopefully Eliot Hearst & John Knott throw light in their “Blindfold Chess. History, Psychology, Technics, Champions, World Records, and Important Games” (2009).
The record in draughts on 100 squares is held by the Dutchman Ton Sijbrands with 32 blindfold games (2014). Probably an improvement of this record is not attainable: he glued his opponents so long on their chair that they reached their physical limits. Sijbrands on the contrary rather lively opened the door of the major’s room in the town of Hilversum, where he had by microphone given his moves (photo). It was Sunday morning 9.04 o’clock; he had passed his first move on Friday in the late afternoon at 17.18 o’clock. “It was heavy”, he admitted and he called it “crazily long”. Nevertheless he walked to the demonstration board to sow some exciting variants he had calculated (photo below with his fatigued face ).
The record in English draughts on 64 squares is 28 games, read further.

The difference explained?
How to explain the much higher number of simultaneous play in chess?
Does the duration of a game play a role?: the average chess game takes 40 moves, a draughts game 60 ‒ it is a rough estimate.
Or is chess less complex than draughts? This is in our society not quite a welcome question. In the past, however, a chess player dared to ask it, would you believe? I shall quote the daredevil below.
An explanation which is less emotionally charged is the difference in material. Two chess players and one draughts player sought the explanation here. Blindfold chess is easier than blindfold draughts, they think, because the variously shaped material offers more hold than the uniform pieces in draughts. Three quotes. The first two are from chess players in a surrounding where draughts is played on 100 squares.
The French chess player V. Cornetz in “La Tribune”, March 1, 1901: “A draughts player has less hold on the multiform chess pieces with their different ranges. But I can be mistaken, because I hardly know something about draughts. I give an example: can a draughts player, at the moment he promotes a singleton to doubleton (king), tell me where the singleton started its travel over the board and which squares it passed? And I also find calculating the different variants when I play chess easier than in draughts. Taking the risk on saddling myself with the fury of chess players I say: in the beginning learning chess is more difficult than draughts, but essentially draughts is much more difficult than chess”.
The Dutchman Haije Kramer in his chess encyclopedia (1965): “Because of its different pieces and its rules, chess lends itself well for blindfold play. Just this diversity offers the human mind a lead. At the time this is the explanation of the fact that draughts is less suitable for blindfold play: the pieces are uniform and in this uniformity it is for the memory much more difficult to find keystones”.
The Englishman William Gardner: “Players who play both blindfold chess and blindfold draughts assure me that the different pieces of chess, even if it concerns 36 pieces against 24 ones in English draughts, mean a support for the memory. Gardner, he was the first draughts player who explained in a clear way how he played blindfold, set up in 1966 a record of 28 blindfold games on 64 squares. He has tried to get to the top in chess too, but in vain [Keessen & Stoep 1982:22-4].
Hearst & Knott promise in the title of their book to go into the psychological aspects of blindfold play. In don’t know if this means they are discussing the difference between blindfold chess and draughts, as Keessen and I did in 1982. 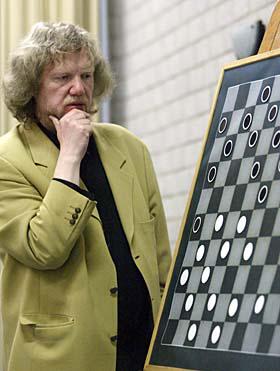