10. Draughts in 13th c. Spain
Several games in the Alfonso manuscript bear the name alquerque. Three of them are relevant for me: alquerque de tres, alquerque de nueve and alquerque de doze.

Alquerque de tres (three) is our noughts & crosses or tick-tack-toe, not played on paper but on a board with 2×3 pieces, see the two pictures. The aim is getting three in an orthogonal or diagonal line to form a mill. On the smaller board top right the game is over: the player who forms a mill wins the game. 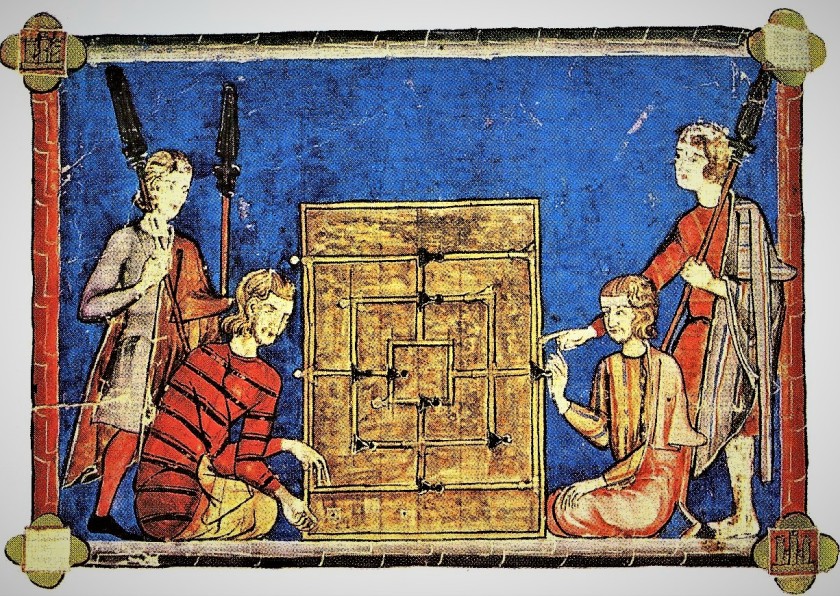 Alquerque de nueve (nine) is morris with 2×9 pieces. Here too the aim is of getting three in an orthogonal or diagonal line to form a mill, but on the bigger board a mill means you can take one of your opponent’s pieces from the board.
The picture below shows the initial position of alquerque de doze (twelve), a game with 2×12 pieces. The clerk at Alfonso’s court describes two features the game had common with our draughts: the leap capture, and a capture can be continued. The two scoring rules are identical too: who cannot play because he lost all his pieces or because his pieces are immobile, loses the game.

About this third game, for brevity’s sake hereafter alquerque, there is a discussion going among board game historians about the question if it has been played without or with promotion.
I shall explain now why the arguments that were brought forward by the no-camp are invalid. Then I shall expound why the yes-camp was right, as far I can see.
The no-camp composed positions and called: “Look what a nice game alquerque is, it is well playable without promotion!”. This is the first argument. It is true, the game can be played without promotion. If I google an hour or so, however, I can add here a lot of gripping chess and draughts games where neither a pawn nor a singleton was promoted. Imagine, a game of chess or draughts should only become interesting with promoted pieces on the board. In that case chess and draughts would be lost games, long ago abandoned: who wants to play a game with a long boring introductory?
The second argument was introduced by Harold Murray. Draughts has been invented by experimenting medieval men, he claimed. They put the 2×12 pieces of alquerque on the dark or white squares of the chess board. The pieces kept their leap capture, but they acquired the right to promote to queen. “The literal sense of the French name of draughts, jeu de dames, proves this reconstruction”, Murray wrote [1952:75]. From which he concluded: “Draughts received its promotion from chess, which proves that alquerque was played without promotion”.
Apart from the warped reasoning ‒it is also valid if alquerque was played with promotion‒ his etymology of jeu de dames is wrong, se chapter 2. Therefore, the name is no proof that draughts borrowed its promotion from chess.
Argument number three is the lacking of a reference to promotion in the 13th c. description of alquerque. “Promotion is such a major rule”, the argument runs, “that the clerk had it certainly mentioned”.
This argument passes too easily over the psychological aspect. I shall exemplify this with a study experience.
The faculty Dutch of the University of Leiden has besides Linguistics and Literature a third discipline: Linguistic competence. In a seminar of this discipline my fellow students and I have buried ourselves in the means applied by an orator to convince a public of his truth.
Another interesting study object are manuals for electronic equipment. In that time, these were written by technologists as their CEO reasoned: ‘They know everything about a household appliance’. Such an expert, however, is not able to imagine himself in a poor lady next door who without lucid explanation does not understand the function of the third button from the top on the side panel, neither that she has to give this button a half turn to the left. The expert was driving the lady up to the wall.
The clerk at Alfonso’s court who draw up the rules of alquerque was this technologist and we are this lady next door: the promotion was so evident for him that he forgot to mention it. A matter of the third button from the top.
But this is only my additional argument, not convincing enough to win a representative of the no-camp over. I do hope my two main arguments will be persuasive.
My first main argument is based on computer simulations. I wrote the Sweed Mats Winther, a programmer: “My linguistic approach reaches to the conclusion that alquerque de doze was played with promotion”. And I asked: “Are you ready to write a program with and without promotion?” Also with different captures: free capture and compulsary capture, is that possible? But about that subject later. He was so friendly to comply with my request. I had two computer play umpteen games [Stoep 2007:138-40]. The result: without promotion the game is unplayable.
My second main argument is the two ways a player can win the game, as described by the clerk. In every draughts variety all over the world there is this rule: you win when you took all the enemy pieces. As far as I know, in every variety ‒but we did not yet record all the varieties‒ promotion goes together with the prescription not to play in backward direction. This opens the possibility to a second win: in case your opponent has immobile singletons you win the game. See this position for an example. Black has to move but cannot: his piece is immobile. He loses the game.

The dwellers of the Canary Islands are an exception. They play draughts with promotion but the singleton moves in all directions, also backwards. In this variety the game above will end in a draw. For this reason, you can only win your game by taking all the enemy pieces [Espinel & García-Talavera 2009:209].
How did you win in Sevilla in 13th c. alquerque? A player, the clerk says, can win in two ways. One: your opponent lost all his pieces. Two: his pieces are immobile. It is definitely draughts.
Now, we can penetrate further into the history of draughts, see chapter 11.